The open relationship is something that is only now rearing its head in the greater cultural zeitgeist as a legitimate set-up. The conversation around them is slowly trickling through to the mainstream, largely around whatever Will and Jada Pinkett Smith have set up between them. Of course, they have existed since the dawn of time with those hunter-gatherers probably hunting and gathering a few notches on their bedposts. They are also definitely not new to gay men, with 2 out of 5 gay men having been involved one. Having extended their Off-Broadway run yet again earlier this year, sexed-up kitchen pink drama Afterglow finally makes its way across to the pond, bringing the gay open relationship to the London stage.

As the house lights dim, the stage lights rise and from underneath the strewn bedding on the stage emerge three fit bodies engaging in an energetic three-way. It quickly emerges from the post-coital conversation that Josh (Sean Hart) and Alex (Danny Mahoney) are an accomplished married couple who’ve invited the young Darius (Jesse Fox) to join them. Once Alex heads off to grab a shower, it becomes clear that Josh and Darius are very keen on each other and arrange to meet the next day. As Josh and Darius’s relationship develops, so too do their feelings toward each other. The play tracks the destruction caused by this blossoming relationship, made all the more complicated by the fact that Josh and Alex have a baby on the way.

As the theatre director with a great sexual appetite, Sean Hart serves a stand-out performance that maintains a relatability while also bringing laying bare his character’s flaws. His feelings for his husband are deep-rooted, but his developing feelings for Darius are seductive, and Hart perfectly pitches the character’s indecision. Under Tom O’Brein’s direction, the cast works well together, though some of the dialogue is rendered unnatural and cumbersome, particularly in the opening few lines. The transitions between scenes also proved to be a little drawn-out, relying heavily on throbbing techno to keep the play’s pulse going.

This work by S Asher Gelman has some compelling moments and he has a talent for creating a tension between his key players. You are however left with the sense that this is a missed opportunity to show that open relationships can and do work, and the breakdown of the central couple re-enforces a lot of the preconceived notions people have around being polyamorous: plagued by sexual jealousy and quarrels. The compelling arguments it makes for polyamory, most notably that the Bible’s full of it, become meaningless when things begin to break down between the open couple. It would perhaps be a more engaging watch if there was an added dynamic to the relationship between all three characters. Perhaps if all three weren’t attractive, fit and white that added dynamic would have emerged naturally.

It’s an enjoyable production, not least because of the play’s plentiful nudity, but also in the drama that it delivers. Packing no surprises, you’re allowed to sit back and bear witness to the unravelling of the perfect lives led by our protagonists. The shower scenes are passionate and delicately lit, the cast is beautiful and the squabbles are delicious.

Afterglow is running at the Southwark Playhouse until the 20th of July. For tickets visit SouthwarkPlayhouse.co.uk 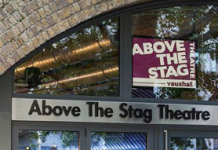 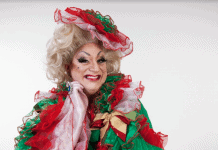 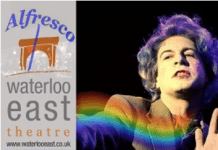 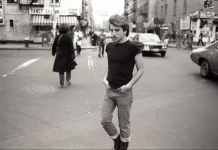 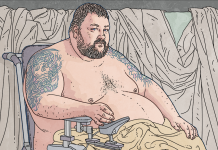 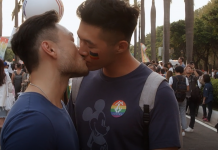