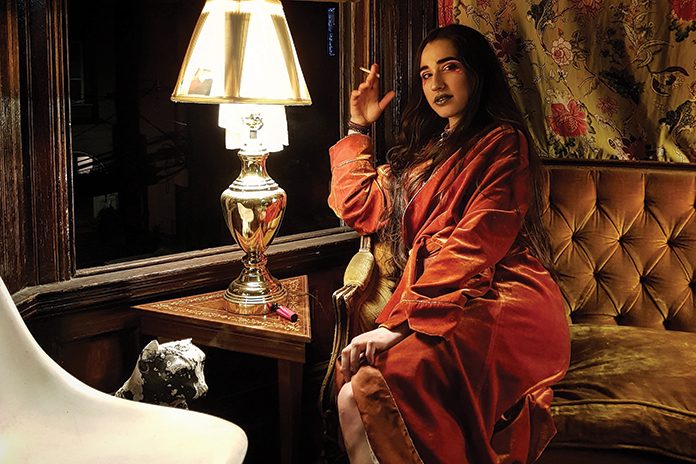 Very few people have the pleasure of going through puberty twice.

To be pedantic: very few have the pleasure of going through puberty one and a half times: Half at thirteen; the full thang at twenty-one.

The first time was textbook…ish: Discovering deodorant, multiple ear-piercings, and drinking K cider in a park at 7pm. Wanting to do unspeakable things to girls. Having an internal crisis about liking girls. Exploring (in the mirror) the really very sexy facial expressions I would make when I finally managed to do aforementioned unspeakable things to said girls. Deciding that I was definitely very sexy – a sexy pioneer at the forefront of the sexual revolution – and also a totally useless maggot person who no one would ever love. Y’know, puberty stuff.

Then there was the other bit. The bit that our adorably camp, achingly awkward male biology teacher tried to explain. Most of the details I already knew because like, I’d watched Skins, okay?

Then bulimia happened. And anorexia shortly followed. And puberty stopped. Three years on, I was informed that I’d ruined my bone density so much that I was infertile. Periods weren’t going to happen. Period.

I felt bad that my mum was missing out on doing the ‘mum thing’ that they do when First Period™ strikes…so I faked it. Cut my hand in a bathroom toiled and smeared it on a tampon. #art.

Plus it meant I could be a total bitch once a month.

I didn’t want my boyfriend (…yeah…I know) worrying that I wasn’t loving the sex he was doing to me, even though I lacked any of the hormones which would make me feel aroused. So I faked it.

Plus I could be a total bitch twice a month…he was rubbish at maths.

I didn’t want people knowing that I was scared – scared that I’d literally broken my body – when friends told me that I “wasn’t missing out on much.” That I was “so lucky” to avoid the hassle of PMS and aching backs and bloating and tampon tax. So, I faked a smile, flicked my hair, and replied, “Yeah, haha, who wants fertility, lustrous hair, or sexual pleasure anyway?!”

I, for one, was very convinced.

I didn’t miss them. I could fuck whenever I liked. Granted, I lacked the hormones necessary to orgasm or enjoy it, but like… I could “do it” at ANY TIME. #PioneerAtTheForefrontOfTheSexualFrontier. Female orgasms were a myth anyway. Right?

I had a wonderfully androgynous body. No mood swings (apart from the intense highs and lows of anorexia, that is, but like, no biggie). I was rational (apart for the intense irrationality prompted by anorexia, but again, like whatever), my brain unpolluted by the hormones responsible for PMS and urges to cuddle small things or eat chocolate… Yeah, MY PMS just stood for PLEASE MORE SEX.

The point is, I was a very successful and impressive and happy person who was very lucky to have gracefully sidestepped the oestrogen-fuelled odyssey upon which my peers had embarked.

Then I had a wake-up call in the form of a heart attack. “Twenty year olds don’t get heart attacks” – or something to that effect – was all I could blurt out, as the doctors explained that I had been mistreating my body for too long. The muscle on the left side of my heart had started eating itself, meaning that it was beating irregularly, and had decided to stop doing the things that you really need hearts to do.

The self-induced vomiting hadn’t helped either. Turns out, if you do it too frequently, you throw up the electrolytes you need to keep your heart beating. So it just doesn’t beat. Who knew?

(Me. I knew. It’s called wilful ignorance and a blind invincibility complex.)

Suddenly, all the things I had wrapped my head around for years – no kids, flat, androgynous body, no sexy sex feelings, no womanhood – burst into my life in a devastating array of colour and flesh. I grew hips and breasts and a huge libido and was utterly horrified by it all.

You try becoming hormonal after you already thought you’d got the ‘woman’ thing down. It’s ludicrous. Period pains hurt so much and totally wipe out a week of your life. And sometimes, you leak blood onto your favourite knickers in a public setting, and of course they were really expensive, pretty ones. And everyone acts like the world keeps spinning? Also, orgasms aren’t myths. They’re magical and simple at the same time, and – sorry lads – achievable multiple times in an evening, if you know what you’re doing.

Puberty: The Adult Edition™ was one of the hardest parts of recovery. It made me proud. It made me wonder if I ever wanted children. It made me want to tear my skin off with pliers, and renounce being a woman altogether. Periods meant wellness and womanhood and – to my inner monologue – failure.

Then I found drag. You see, throughout Puberty: The Adult Edition™, my body ceased to be my own. It grew and fluctuated and inflicted pain on me completely without my permission, which was just rude. But the first time I taped those burgeoning breasts away with rolls of beige sports tape, I knew that I was onto something:

I would cut myself new cheekbones that I chose with a contour brush; chisel out my abs with powders; smooth my chest so flat that you could eat your dinner off it.

For years, I had used unhealthy methods to control my body. Yet I had still squirmed with distaste every time I wriggled into my bed, clawing with judgemental fingers at any piece of flesh still pinch-able between my thumb and forefinger. That’s what anorexia does, I guess. You will never have enough control over your body, no matter how thin you get.

Now, I am wittingly using very cool and fun methods to control my body. I decide when to slip back into androgyny and do so without killing myself in the process. I am very cool and fun. (Okay, perhaps just ‘fun’, but cool is a societal construct, get off my case)

Clothes had become something I genuinely feared. Every time I lifted my arms to slip on a shirt, or pulled up a pair of trousers, I braced myself for the inevitable onslaught of anger and guilt. I stopped taking joy in my body; I was scared of it.

As Christian Adore – my drag persona – clothes were sequinned and iridescent and exciting. I wanted to paint in splashes of colour and slip into a thousand different ‘lewks.’ My body was a vehicle for something beautiful.

The first time I came off stage to register real, actual, human sweat under my arm pits, I ran around the dressing room, proudly declaring to any drag queen that would listen that I was ‘sweating like a pig in schul’, smiling from ear to ear.

When you are ill, and sans-hormones, your body doesn’t sweat. You just feel cold. All the time. But after performing with my new, flash, invincible body? I had earned that sweat. I still feel a bit proud every time I sweat. I will never resent buying deodorant.

The playful flux of presentation encouraged by drag is – I think – a little bit magic. And healing. Now, whether I’m playing Christian, or myself, or a marvellous creature somewhere in between, I feel a little bit magic. Peaceful and excited and magic, all at once. My body is mouldable and fluid and tells gender and sexuality to get fucked. It is unruly and fluctuates and doesn’t always do the things I tell it to do. But it now has the energy to perform on stages and stay up ‘til 3am writing this article…and this was a great article, so…