The world needs more people like Sharan Dhaliwal. While many of us sit on social media and wax lyrical about how things should be better, she’s thrown on a pair of trainers and a statement necklace, cooked up a concept and gone out into the world to MAKE things better.

She is the editor and creator of Burnt Roti, a magazine that represents and documents all sparkling corners of South Asian culture, with a focus on mental health, LGBTQ+ issues and women’s rights.

Sharan is finding her feet as a member of the LGBTQ+ community herself, having come out as bisexual earlier this year. We had a pint with her in a cosy North London pub and chatted about her drive, determination and what things are like for a queer British woman of South Asian descent in 2019.

Hi Sharan – Burnt Roti sounds incredible! What inspired you to start it?

It was around three and a half years ago, when I was having particular conversations about my identity. I had a nose job in my early twenties, and hadn’t considered the implications it would have for my heritage. I had what some would consider a North Indian Punjabi nose – I remember once on a plane back from India, a man asked me if I was from Rajasthan. I’ve never had anyone question where from India I was, previous to my nose job. So, one day I woke up and decided to create my magazine. It was for my selfish need to talk about things that affected my life. I had written a couple of blog posts about my nose job, body hair and learning languages. People had taken to them and were sending me messages about their own experiences – and I felt that the world should be able to hear these stories. Since Burnt Roti’s inception, I came out as bisexual and realised that a lot of the reason that I had held back from living my true life was because of the way I grew up. I wanted to make sure that it wasn’t a continued pained experience for others, so I started to focus on LGBTQ+ stories, and out of that have created Middlesex Pride.

Tell me about that.

It’s the first Pride event for Middlesex – I want to focus on discussions and education. I grew up in Southall and Hounslow and, along with many other South Asian people, was immersed in a very traditional life. When I came out, I noticed messages from people thanking me for doing it, but also telling me that they can not – I learnt that a lot of these people lived in the Middlesex area.

So that’s specific to the area?

There’s a severe lack of LGBTQ+ visibility in communities there and that creates two things – a lot of people don’t understand what sexuality means for the LGBTQ+ community and tend to focus on sexual acts or HIV. It means that the stigma attached to it causes young people to stifle themselves, sometimes exacerbating mental health issues. Another thing it does it creates a doubt in the minds of those who are discovering their sexuality. If it isn’t discussed or taken seriously, it must not be real. People could live a long time (like myself), keeping any feelings or desires to themselves. My mental health suffered, I was in various relationships I didn’t actually want to be in and I was stuck in a destructive pattern of getting with someone, disliking the situation and leaving it soon after.

So attitudes towards sex and sexuality where you grew up were a little guarded?

There’s a stigma around sex and sexual acts (like with much of society), and it’s considered ‘dirty’. Talking about our bodies is seen as ‘disgusting’ – including puberty and menstruation. A lot of South Asian womxn learn to keep to themselves – never asking questions and never really learning more than they’re told. It’s changing a little, but there are still remnants of it there, which I want to break down. Older generations would, for example, say that they never heard of the word ‘lesbian’ before. There’s not really a word that translates in the Punjabi language now (I’m not sure if that’s changed over time) but there is a language barrier. Teaching certain words, what they mean and what effect they would (and wouldn’t) have on them is important. There’s still stigmas and negative connotations, but it needs to be broken down and explained.

Does a lot of that relate back to how things are now in India? How did people react to the news of homosexuality being decriminalized?

It actually really helped normalise conversations around sexuality. Don’t get me wrong, everyone isn’t hugging and accepting each other, but there’s an interesting take on legislation change allowing people to change their minds, especially with the government having such a stronghold on the minds of particular older generations in India. So there’s an interesting change that’s happened. When this law came into effect, we witnessed some change in the communities in the UK – a big Bollywood film centred a lesbian romance and my family saw it, spoke about it and accepted it. That doesn’t mean it’s had direct affect on South Asians around the world, but there’s a small weight lifted from our shoulders now that we know we aren’t considered criminals back in India. Some older and some younger generations here still have negative reactions to homosexuality, but I suppose that’s something that can be found in most communities.

So, being bi! What are your experiences like as a bi woman of colour in 2019?

Ok so let’s talk about fetishisation. The first woman I went on a proper date with was a white American, who seemed to have an obsession with Indians. I’m not gonna lie, I ignored the red flag from her text which popped up on my phone in all caps “I REALLY WANT AN INDIAN”. At first I wondered if she was Indian, and then she spent the rest of the day texting me about Bollywood films, as if I knew nothing about them. It felt strange. But I was incredibly attracted to her and just wanted to go on a date, so I did. She didn’t speak too much about Indian stuff then, but the texts continued – she wanted me to teach her Hindi. I suddenly felt like I was working as an unpaid language tutor. For some reason, I expected to experience fetishisation from cis men, not from the LGBTQ+ community – it was that naivety that was the biggest blow. I’ve had struggles being specifically bi on dating apps – lesbians haven’t taken me seriously. I’ve had some unmatch me because they assumed I was just “messing around” on the app. I’m now in a relationship with a woman and it feels amazing – she doesn’t question my bisexuality, she knows I want to be with her. It’s not just the lesbian community – there are bad eggs everywhere. But bisexuality is definitely considered a ‘half assed attempt at being gay’. 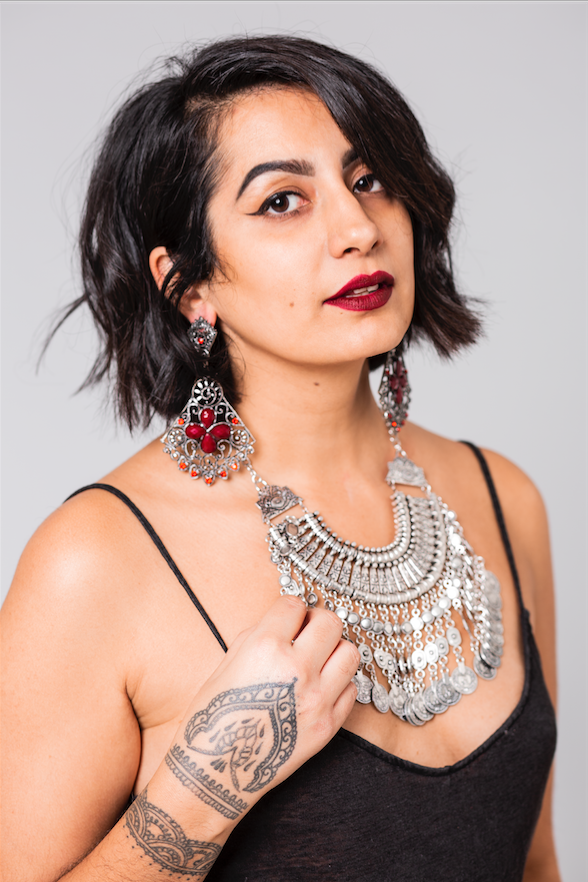 How did your family react when you came out?

My dad had a pure and wholesome reaction, where he quoted me verbatim “Sharan, sexuality is fluid” and I lost it.

Firstly, credit me when you quote me, secondly I don’t even know if he knows what he’s saying. But bless him, he doesn’t care about my sexual preference, he just wants me to be happy. My mother had a strange reaction – she jumped between disliking it and not caring. I think she thinks there’s fifty per cent chance I will marry a man, so she’s just relying on that. I don’t want to get into maths with her, so I just let her be for now. But a big part of Middlesex Pride is to allow her and others like her to find out more about what it means to want to be with someone who isn’t the ‘expected gender’. I want her to know it’s okay if I don’t marry a cis man. In fact, I’m going to marry my girlfriend, so she has to be on board or she won’t get to hang out with her grandkids lol.

So…after your experiences in the last year or so…what would be your personal advice to people in a similar situation to you, who’d like to come out?

It’s really hard because everyone’s experience, no matter how similar it seems, is so distinctly different that I sometimes find it difficult to give advice. I surrounded myself with queer people, I went to QTIPOC events – I familiarised myself with the reality of living an open queer life and when I was comfortable, I came out. But that doesn’t work for everyone. I had the privilege of using my platform to come out. I essentially published an article without telling anyone and that was my coming out. I also had a support system – some people can be in abusive or constrictive situations, so I would just tell them to prioritise safety. When they can, immerse themselves in the community, talk to people online if you can’t go to events – open up to them about your life. Find your family. That can help.

You can follow Burnt Roti on Twitter @BurntRotiMag and Sharan @peatreebojangle. Middlesex Pride will be held in Osterley Park on June 28th 2020 – follow everything about it on social media channels @MiddlesexPride.