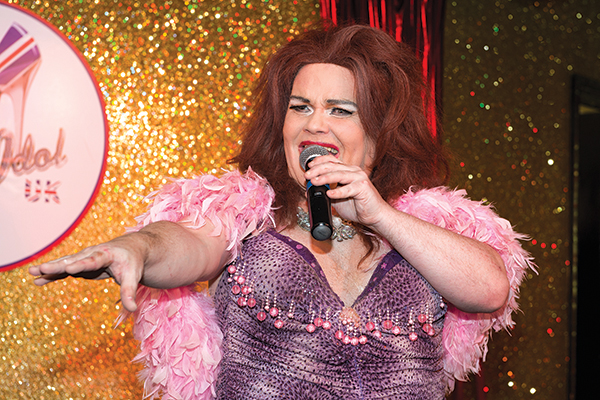 09/05/13: Titti La Camp opened the second heat of the Two Brewers search for a Drag Idol semi finalist last Thursday – Karen Carpenter style. The guru of the competition was clearly ‘on top of the world’ and raring to go after an audience member randomly offered to lick the remaining chocolate off her teeth, after the opener (kinky!).

So the scene was set. We had a glamorous host and panel of judges both primed and chomping at the bit to start, a glittery picturesque stage, decorated by the insanely camp Paul Flowers: now all we needed were some contestants to entertain the half conscious audience.

I settled down, perched on me pouffe, in the delightful company of cabaret starlets Lady La Rue and Adora Dix to watch battle commence. Vicky Dean, who traipsed all the way from Manchester with her mix of lip sync/magic opened, followed by The Bear Did Lady, who I reckon came straight from The Hoist (titters) with parody songs about the ‘hanky code’ and topical gags.

Third act Milo Miles, glided onto the stage with the command of a Vegas showgirl, almost blinding me with the brightness of her sequins (stunning). This prompted the rather poetic comment from judge Myra Dubois, which made me chuckle: “I’d rather have very good classic style drag than shite new drag, love”. Perfectly put I thought, in typical Dubois fashion, too. Final act, and the eventual heat winner, was Topsie Redfern who opened with a rather breathtaking male soprano operatic number and a set that commanded the late night audience easily.

Topsie joins last week’s heat winner Miss Cairo in the Heat Final in two weeks time. This is one you’re not going to want to miss. I’ve seen both perform and these girls are super talented in quite different ways. Book the next day off, it’ll be a big ‘un. Thanks to manager Jimmy Smith and all the staff, see you in a few weeks!