The Two Brewers bar should be your first stop upon hitting Clapham, South London, for a gay night out, since this is an award winning London gay pub. It won the Great British Pubs Award for best LGBTQ+ Pub.

DJs in the main bar spin pure cheese and the dark, cavernous back room morphs into a proper club, playing into the night. The Two Brewers has busy club nights Friday and Saturday as well as regular cabaret acts throughout the week. Because there’s something on offer for every gayboy and t-girl the Two Brewers is enormously popular, with a crowd-pleasing mix of commercial dance music and drag shows.

Oh, if you’re on a manhunt, there is lots of Clapham crumpet on display too since there's enough to have you buttering your own seat.
QX Review Quotes, Two Brewers Bar Clapham :
¨Walking in we couldn’t help but be struck by the sheer volume of handsomeness in one room.¨

¨The place was littered with hunk upon hunk. Our mission for the evening was to have hunk upon, well, us.¨

¨Sunday nights at the Two Brewers, south London’s home of drag cabaret, have become legendary¨
Received a Best Gay Pub Award:
The Two Brewers which is in Clapham High Street, South London, was the winner of The Great British Pub Awards 2019, Category : Best LGBTQ+ Pub. Jimmy Smith has been at the Two Brewers for over 20 years and he is no stranger to accolades as he was recently granted the honour of the Lambeth Coat of Arms, don't ya know!

While collecting the Best LGBTQ+ Pub award, Jimmy said: "It's been a long time coming! To be recognised nationally as the best in the industry really is the icing on the cake, topping off all of the other awards we've won. I am so incredibly proud of the whole team and our wonderful customers who make it all worthwhile."

The Two Brewers is noted for its hot men and gay cabaret shows which is why it´s so popular!

Cabaret Artists at The Two Brewers

Click on the 'What's On' button below for full listings for this venue, and other gay bars and clubs across London.

All you need to know for the 4th July LGBTQ Party... 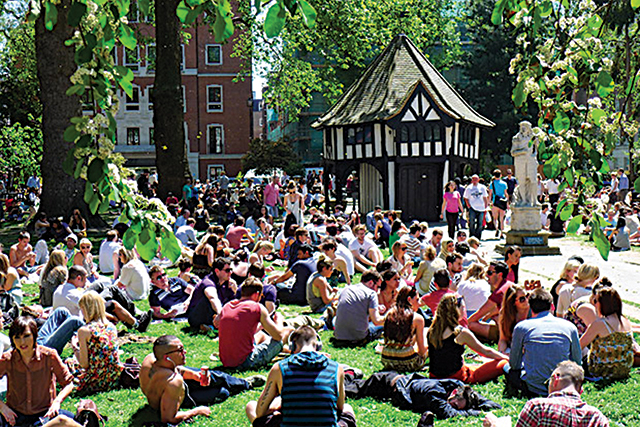 The Two Brewers – Struck by Volume of Handsomeness