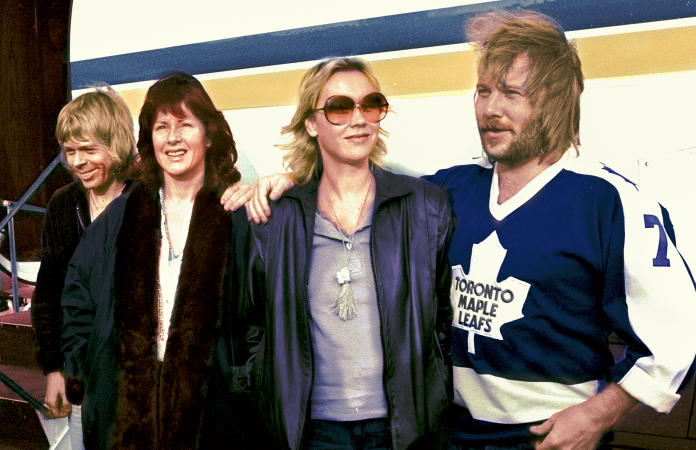 As one of history’s most commercially successful bands, ABBA’s music is everywhere. Is there a Fiat out there that hasn’t had an ABBA Gold CD in its glove compartment? Has there been a wedding party this side of the 70s that hasn’t had elderly women swinging their arms to “Dancing Queen”? Have you ever been to a pre-drinking session that hasn’t had the looming threat of “Gimme! Gimme! Gimme!” booming out of the Bluetooth speaker?

ABBA to music is what football is to straight men. It’s what GHD straighteners are to girls named Becky. It’s what Fleabag is to desperate single people in their early thirties. Their songs are everywhere. From this year’s Glastonbury to the mouth of Meryl Streep, there’s no escaping this Scandi foursome and their tunes. No matter how intriguing their harmonies or emotionally complex their lyrics, there’s no escaping the band’s innate stink of naff. All smiles in platform boots and buckets of glitter, they can’t be said to be the edgiest of bands.

When you remove their songs from the blinding shine of the ABBAverse, something special happens. Whether you’re slowing them down, adding a pumping beat or stripping them bare, covering an ABBA song is a safe bet on something spectacular.

Over the years, large swathes of musicians have tried their hands at an ABBA cover. It’s a staple of a live in-studio set. YouTube is positively littered with teenagers covering dancing queen with an acoustic guitar in their step father’s basement. It’s safe to say not all of them are winners. Then again, there are those select few who manage to rival the originals superior status. A cover so different and inventive that it takes you a second or two to recognise it. They allow you to grove out to your favourite tunes and not only side-step the pleasurable guilt of listening to ABBA but feel like you’ve discovered something you can show your edgy, ‘with it’ friends.

Scottish group Camera Obscura dedicated their early career to cultivating a cool and alternative image in order to elevate themselves from being just another hum-drum indie band. In 2007 they put it all that on the line with the release of one of ABBA’s most instantly recognisable hits. This cover foregrounds the song’s rather dismal lyrics, with a strumming guitar bringing a tenderness to it. Singer Travynne Campbell’s voice, teetering on the edge of breaking, brings to life the narrative of a performer struggling to juggle her career and her relationship. The story behind Super Trouper takes precedence in this cover, where the only thing keeping our crooner powering through the stormy tide of a busy life gigging is that one special person.

Yes, it’s another guitar-heavy cover. It’s a quick way of taking the song from a dazzling disco to a dimly-lit cafe bar. “Angel Eyes” from the 1979 ABBA album Voulez-Vouz is perhaps the band’s more frank narrative songs. The listless voice of now queer favourite solo artist John Grant in this The Czars cover weighs down the lyrics emotionally. In flipping the voice from the alto tones of Agnetha Faltskog to Grant’s deep, baritone rasp queers the lyrics, turning our protagonist from a woman betrayed to a man caught up in a bisexual melodrama. “It hurts to remember all the good times, when I thought I could never live without him.” Slowing the track from ABBA’s 45 RPM speed to cover’s 33RPM also gives the listener time to digest the story.

This cover doesn’t shy away from the synths that ABBA were known for, but takes a very different approach. Once again a guitar brings a more wholesome atmosphere, though this time paired with waving sounds and produced tones which widen the scope of the track. DALUMI doesn’t stay as true to the original melody as other artists tend to be, playing around with cadences, oftentimes trailing them downwards. Israeli singer-songwriter Nadev Dalumi said that he interpreted the song to be about “a sad teenager… watching his popular friends going out to parties, while he’s been left behind.” The track truly delivers on that reading of the original.

Straitjacket Fits was one of the biggest names on the late ’80s New Zealand music scene. Signed to renowned label the Flying Nun, guitarist Andrew Borough saw the most successful years of his career with them. Unfortunately, the band struggled to follow up their early success, leading to Borough to start up his own band in Bike. When the band’s label decided to cash in on some ABBA mania in the mid-nineties with compilation album Abbasalutely, they got roped into producing a cover. It’s really successful, with the wash of guitars underscoring the song’s sincerity without making it overly sentimental. Bravo, boys.

Perhaps the strangest cover on the list. Giving drama, tragedy and sorrow, this “SOS” cover cuts deep. There was real excitement when the highly-influential band Portishead were rumoured to be creating new material for the first time in six years. In a surprise move to almost everyone, one of the tracks released as part of their highly anticipated return was an ABBA cover. Their cover is haunting and beautiful in equal measure. The lyrics are transported from a spirited protest to a desperate cry for help.

Knowing Me, Knowing You – The Volebeats

If you were to ever slowly read out the lyrics of this ABBA ballad, you’d easily be convinced that these were the words of your typical country breakup song. “A-Ha”s aside, of course. In a world of Taylor Swifts taking Country to Pop, it’s refreshing to hear Pop being taking to Country. This track treads dangerous territory and could easily tip over into gimmick, but it manages to remain sincere. The Volebeats make it their own, and memories of a Stockholm club in the early 80s are washed over by a forested Michigan landscape. A rolling drumbeat brings an on-the-road feeling to the song, which makes the break-up that more serious.

Lay All Your Love On Me – Pale Honey

ABBA aren’t sexy. Fact. That doesn’t mean their songs can’t be. This Pale Honey cover brings pure sex to the classic ABBA song. Sexual jealousy and obsession underpin this pumping track. You can just imagine it being the soundtrack to a revenge montage in an original Netflix movie about a woman scorned. Being fellow Swedes themselves, Pale Honey have the same grasp of the lyrics that writers Benny and Björn have, with the added quirt of the darling accent. The guitar riff really makes this cover unique, bringing a sensual energy that has you slipping on your fishnets. Going the opposite way of the original, the chorus of this cover is stripped down compared to its verses. Just a drum beat and the longing voice of Tuva Lodmark. This cover is a bunny boiler’s wet dream.

From a beloved Scandi foursome to beloved Scandi sisters. First Aid Kit are every indie gay boy’s go-to for a chilled afternoon of thinking existentially. The Soderberg girls haven’t properly recorded Chuiquitita, but it’s often a welcome surprise in their live sets. They don’t do all that much with the track, but by virtue of being who they are, they bring a youthful sweetness to the song. The pair are known for their tight harmonies so an ABBA cover was inevitable. Agnetha and Frida bring strength to the vocals, which is what this song’s all about. Who better to cover a song about women supporting women than two sisters who have built a successful music career together.

From the sincere to the ridiculous. If this is your first encounter with Sweedish dance-metal, buckle your sphincter. Perhaps the campiest song ABBA’s ever turned out, “Waterloo” shouldn’t be anywhere near the metal genre. Yet, here we are. The internet tells us that the Black Ingvars are a humorist heavy metal group, and this tracks sure proves that. It’s like if Gene Simmons tried his hand at the karaoke classic. It’s pure nonsense, not helped by being in the original Sweedish, but it’s damned entertaining.

Speaking of something being pure nonsense yet entertaining, here’s our top pick of Cher covering ABBA. She travelled the world with her album of ABBA covers and this is the one that we can imagine ourselves listening to unironically. Paired with a H&M television ad style music video, there’s a conscious attempt to stay true to the original with this cover. Cher is autotuned though thankfully the vocoder isn’t anywhere in sight. That’s not to say that the electro vibes aren’t flowing, but her actual vocals are closer to her “Turn Back Time” days. It’s not often that styling can save a song, but those tweet shift dresses really worked. This song is to be enjoyed with thoughts of tussled blonde fringes and black turlenecks only.

Another ABBA exhibition is coming to London this year