The QX Gay Guide to London is the most comprehensive gay guide with gay maps of London there is. QX Magazine is now in its 25th year of publishing a free printed magazine every week. The magazine is available on the web. QXMagazine.com is also the most informative website on gay London there is. QX prides itself on not sending people to venues that are closed or events that are no longer running!

¨Take the time to read this introductory page. You can click on the links for relevant and up to date information.¨

Welcome to our amazing city and we hope you have the time of your life!

Where to get QX Magazine – your FREE gay guide to London

QX publishes the only free gay weekly magazine in London so your first step has to be to get the latest copy of QX to find out what’s on. You can see the latest free digital issue of the magazine by visiting our homepage. The free magazine is posted on the web every Wednesday mid-day. There are also lots of back issues to keep you interested.

QXMagazine.com also has a host of extra information centres not available in the printed magazine. We’ve detailed below all the links on the site you need in order to successfully navigate your way around Gay London.

iPhone owners can download the latest issue that appears in print by downloading the QX Magazine app.

You can get the QX Magazine App for Android.

You can pick up the latest copy from most gay venues in London  and we distribute the latest free magazine every Thursday.

Gay Guide to What’s On Every Night In Gay London.

Night by night listings – You can read about what’s on in gay London for every night of the week ahead while you’re on the go by checking out our listings pages.

What’s Hot This Week – If you want a review of the best of the week click here.

Where in London are the Gay Clubs, the Gay Bars, and the Gay Saunas?

In our gay guide to London we’ve divided the city up in to areas to make it easier to navigate our beautiful and exciting metropolis.

The Gay East End of London is well served by the underground and hotels etc. are cheaper here. As London enjoyed post war prosperity and the prices of property in central London sky rocketed, relentlessly, what was once a run down, bombed out, East End became gentrified. It´s now where the cool, the trendy, and the edgy collide for a colourful cross section of characters to create one of the city’s most edgy gay bar and club scenes!

Expand the map below and click on the pins to see what’s where. Click here for a detailed gay guide of the gay venues in East London  where you can also download a handy printable map.

Everybody has heard of the West End and at the heart of it is an area called Soho. Soho was once a fashionable area for aristocrats. It is now the very heart of tourist London because it also contains the central theatre district. Consequently it is more expensive than the East End. It is the biggest gay area of them all, featuring a diverse range of businesses from traditional gay pubs with grand drag dames delivering glittering cabaret every night to more modern gay bar/club concepts.

Expand the map below and click on the pins to see what’s where. Click here for a detailed gay guide of the gay venues in Central London where you can also download a handy printable gay map of London (Central London).

Head south to Vauxhall where the once industrial area has transformed itself into London’s hub of activity – both day and nighttime. Late night after-hours gay clubs meet legendary establishments to create a vibrant scene. Plus, just a few tube stops away from Vauxhall is Clapham, a popular destination/mini gay village in its own right.

Any gay traveller to London will find this city worthy of the reputation of being one of the most diverse and tolerant cities in the world with an LGBTQ+ scene that is truly innovative and inspiring. There are laws that protect us from discrimination. The age of consent is 16. Gay marriage came in to force in 2014. Few people will be bothered by public displays of gay affection in central London because the vast majority are supportive of gay equal rights.

The fact that there is so much traffic and that the roads always seem to be being dug up make London a difficult city to navigate above ground by any kind of vehicle.

If you´re not in a rush then the iconic buses are like a cheap site seeing tour. You can pay as you go.

The most efficient way to travel is by underground. Avoid travelling on the underground during rush hour because workers are travelling to and from work.

The iconic black cab can be found anywhere and they’ll pull up at the side of the road. They are licensed and well informed, so you´re in safe hands. Short journeys stuck in traffic can end up being expensive, so best to use them when it´s not busy. 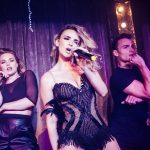